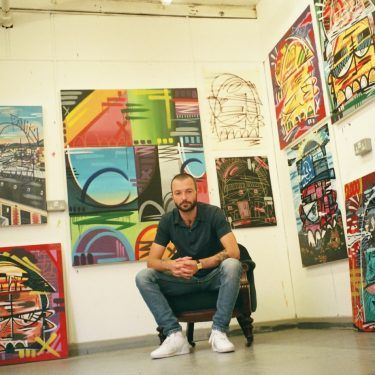 Born and raised in the borough of Camden, north London, Panik started painting graffiti in 1999, influenced and propelled by the DIY attitude and energy of the many subcultures that, like his graffiti, swirled around London’s streets at the time. Teaming up with the late Jan ‘Aset’ Francis and others he learned his trade in the North-West London graffiti crew ATG, that dominated the scene during this era. By the mid 00’s Panik had acquired the title of the ‘Rooftop King’ from his prolific rooftop-based output, carving out his own lane, which he’s travelled in ever since.

ATG quickly captured the zeitgeist of the 00’s, using graffiti as a springboard to create a movement that spanned across art, music and street wear and were known for putting on era defining raves that captured the restless optimism of the times.

Although briefly attending Central St. Martins as a student, Panik didn’t gel with the formulaic approach to learning art, and set about his own path. In 2005, he pursued a self-taught journey of creating large-scale murals, character-based pieces and studio work, introducing his trademark faces, which to this day, he uses as a scaffolding to build pieces that explore social issues and the day-to-day complexities of modern life. He’s since exhibited in London, Paris, Amsterdam and New York, and has been commissioned by the likes of Nike, Adidas and Moncler, all the while continually painting on the streets of almost every corner of the planet. In 2017, after being invited by Banksy’s Walled Off hotel, this landed Panik in Palestine where alongside Jan Francis, they painted the infamous 100ft ‘Stand Taller Than Walls’ piece along the dividing wall with Israel.

Panik’s focus on social issues doesn’t just stop at his artistic expression. He prides himself on the work he regularly does with youth and community projects, specifically the NW5 Play Project Youth Centre in North London. With the centre being so close to where he still resides to this day, he regularly looks to inspire and support the local youth of his neighborhood and beyond to use creativity as a positive release of their energy, much in the same way he himself used graffiti when he was younger.

Panik has developed an artistic flair that’s wholly his own. His style pays homage to his roots, fusing London, Parisian and European graffiti styles of the early 00’s alongside a naturally acquired approach to painting, that dances anywhere between the lines of surrealism, abstract expressionism, American mid-century and psychedelic art.

Using mixed media, including his own 35mm photography as a starting point, Panik’s art often highlights the beauty and hidden story behind some of the world’s, seemingly irrelevant, day-to-day features which - combined with a highly developed abstract visual language - creates a unique and unpredictable style, informed by 20 years of accumulated artistic and street-level experience, making him the artist and person he is today.

With a focus on bold brush strokes, layered up to create features bursting with texture and pattern, Outro was painted in a way that expresses the will to leave your current situation and seek out a new world.