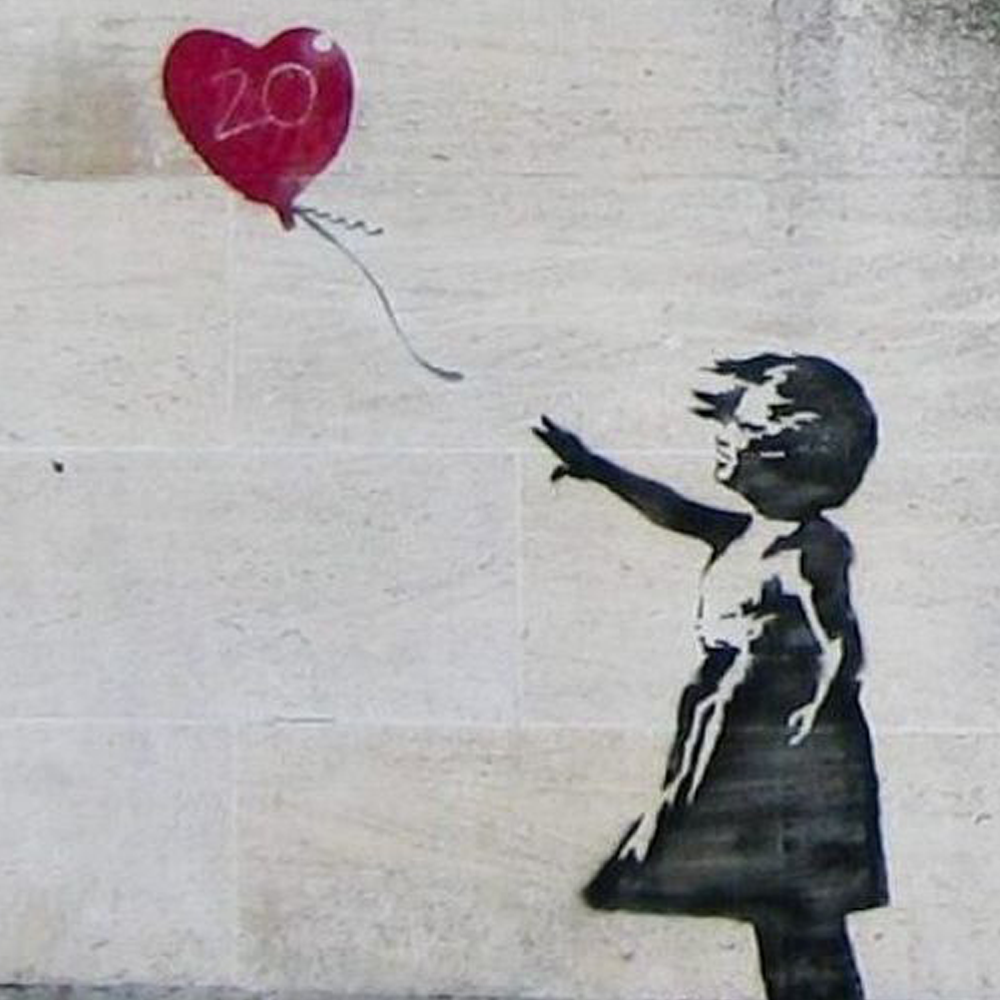 From Bristol in the west of England, UK he needs no introduction. Whether plastering cities with his trademark parachuting rat, painting imagined openings in the West Bank barrier in Israel, or stenciling “We’re bored of fish” above a penguins’ zoo enclosure, Banksy creates street art with an irreverent wit and an international reputation that precedes his anonymous identity. “TV has made going to the theatre seem pointless, photography has pretty much killed painting,” he says, “but graffiti has remained gloriously unspoilt by progress.”

Banksy has gained his notoriety through a range of urban interventions, from modifying street signs and printing his own currency to illegally hanging his own works in institutions such as the Louvre and the Museum of Modern Art. Most often using spray paint and stencils, Banksy has crafted a signature, immediately identifiable graphic style—and a recurring cast of cops, soldiers, children, and celebrities—through which he critically examines contemporary issues of consumerism, political authority, terrorism, and the status of art and its display.

I Fought the Law

THIS IS A RARE WORK

Media: Limited edition screen print from an edition of 500 released in 2004 by POW with accompanying COA from Pest Control - 70cm x 70cm

I Fought the Law is based on actual video footage of John Hinckley’s 1981 failed assassination attempt on U.S. President Ronald Reagan. In a violent struggle, one man is being pinned down by three other men, whilst a fourth onlooker watches the scene from the right. The man on the ground has dropped a paintbrush, with which he has just scrawled the words ‘I Fought The Law And I Won’ in bright orange paint on the wall behind. The four characters on the left depict the members of President Reagan’s private security team tackling John Hinckley, a delusional schizophrenic who fired five bullets at President Reagan on 30 March 1981. But with true Banksy irony, the criminal in I Fought The Law is a graffiti artist, instead of a killer.

The text references the title of the song I Fought The Law (and The Law Won) by The Clash from 1979. A second instance of the British rock band’s influence on Banksy’s work can also be seen in his mural portraying a punk smashing an office chair, appropriating the cover artwork from their 1979 album, London Calling. This is the opportunity to acquire the very first NFT of this image!